NBA is the Most Accommodating Sport

Above: 2018 Defensive Player of the Year and Utah Jazz player Rudy Gobert attends the opening of the Utah Jazz's sensory inclusive room

Going to see your favorite basketball team play in person is a dream for many children. From hanging a poster of their favorite player on the wall and watching every game in the living room to going to the arena and actually seeing them play in person is sure to excite any sports fan. The roar of the crowd, the screaming of the team’s chants and the cheers of victory. These would all be sensory overload for the normal person but for an autistic sports fan, they may not even make it to the start of game time. The large crowds and pre-game noise of any sporting event may be too much for those on the autism spectrum, forcing an earlier than anticipated exit and missing out on making incredible memories. Luckily the NBA is leading the charge when it comes to accommodating those with sensory processing issues such as autism, PTSD or dementia, and allowing everybody to experience a once in a lifetime opportunity of seeing their favorite team win a game in person.

On February 27, 2016, the Belles family took their non-verbal son Carson to see the Cleveland Monsters, an American Hockey League team, play on Autism Awareness Night. Since Carson is non-verbal, he uses an electronic device that hangs around his neck to communicate. This device set off the metal detectors at the security checkpoints and a security guard attempted to remove Carson’s device. Carson headbutted the security guard, attempting to stop the guard from taking his communication device. The guard remarked to Carson’s parents, “Better get control of that child.”. The Belles family was obviously hurt by the guard’s comments, especially on Autism Awareness Night. Amy Belles responded on social media stating that there “was no autism awareness on Autism Awareness Night.”. Quicken Loans Arena (The Q), home of the Cleveland Cavaliers and Monsters, responded with a heartfelt apology from Antony Bonavita, the senior vice president for facility operations at Quicken Loans Arena. Bonavita’s son is on the autism spectrum and Bonavita felt horrified on a personal and professional level at what had occurred the night before. The response from the Q did not stop there. Just over a year later, on March 29, 2017, the Q unveiled the first sensory inclusive room in all of American professional sports. The Q worked with KultureCity to train the staff on how to accommodate those who are disabled, especially those who have a condition that you cannot see, like sensory sensitivity. Additional sensory inclusive rooms will be built with the assistance of KultureCity in 19 arenas by the end of Fall 2018. 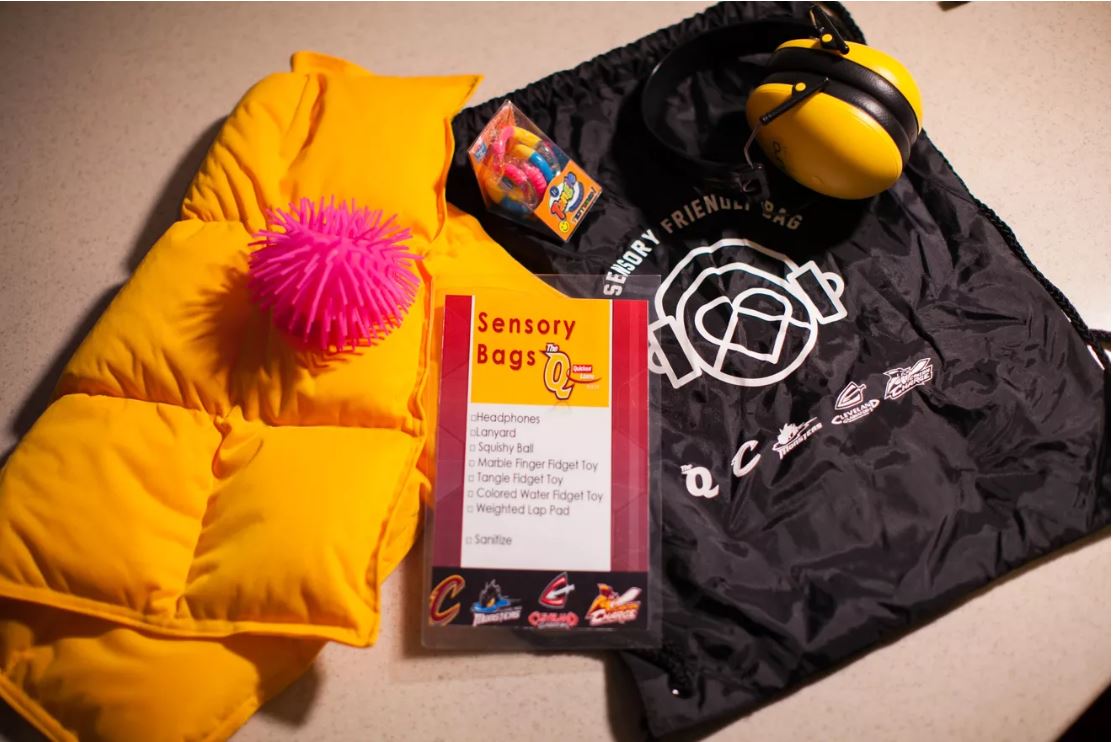 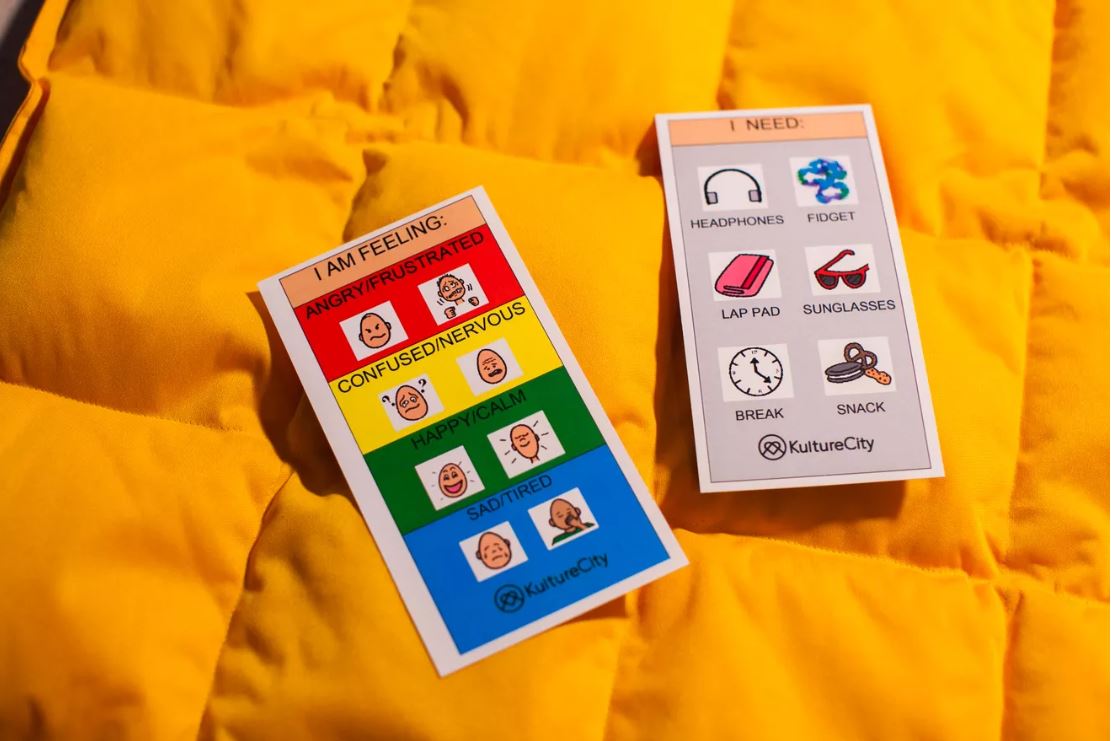 Sensory bags handed out in the Q in Cleveland Original Images by: KultureCity

Deron Williams has two Olympic gold medals. He was selected in TNT’s 2011 “All-Star Ultimate Fantasy Draft” (Here is 43 minutes of outstanding entertainment: https://www.youtube.com/watch?v=QHbdbj4TRfw) where the best players of all time were chosen to create the best possible teams. Despite those accomplishments, nothing is more important in Deron’s life now than his 7 year old son, Deron Jr., or DJ. DJ was adopted by the Williams family and just over a year later, learned that DJ had autism. The diagnosis hit Deron hard, as Williams was deciding which team to sign with for the upcoming NBA season. Wanting the best for his first son, Deron signed with the newly created Brooklyn Nets, a team that was in close proximity to a well renowned school for autistic children. Starting in 2011 and throughout his future in the NBA, Deron Williams has hosted various autism awareness events and has become an ambassador for Autism Speaks. When the Brooklyn Nets held Autism Awareness Night every year, Deron would donate his private suite to a family with an autistic child so the family could have a suitable environment to enjoy the game in. Deron is well aware of both the challenges of bringing an a person with sensory sensitivity to a basketball game and his efforts inspired other players to learn about how to become more inclusive. 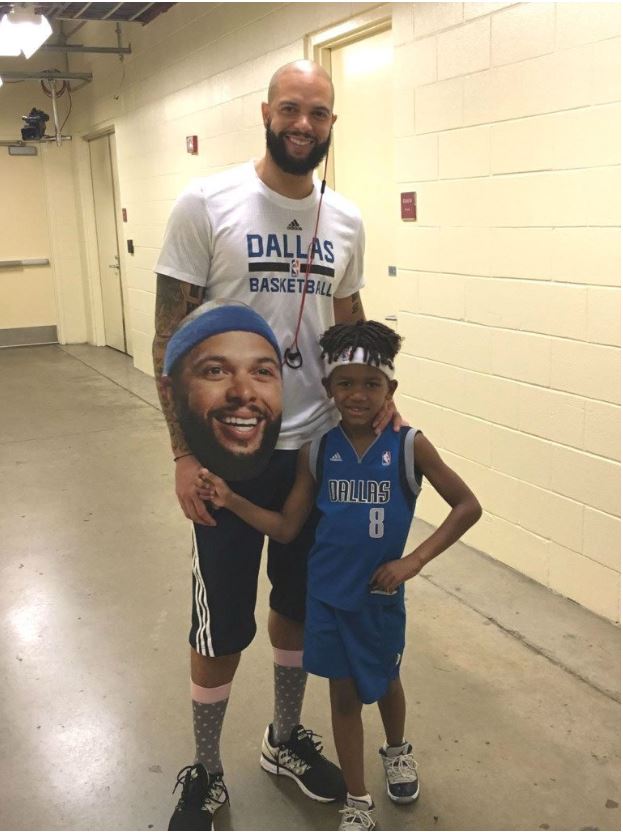 Deron and his son DJ at a Mavericks game Original Image by: Deron Williams Deron Williams’ former team is the Utah Jazz, he played for the Jazz from 2005 through 2011 before signing with the Brooklyn Nets. In March of 2018, the Jazz opened their own sensory conscious room in their arena, paid for by Vivant Gives Back and designed by KultureCity. Vivant Gives Back has provided nearly 60 rooms similar to one in the Jazz arena to different private schools and homes. These rooms have a primary purpose of calming down an overstimulated person, but also serve a secondary purpose as well. Sports tickets are more expensive than ever and being forced to leave early because of crowd noise is unfortunate and may prevent families from coming back again. With the addition of these rooms however, those who may be overstimulated can go into these rooms, smile and become calm again, and return to the arena to experience the game. 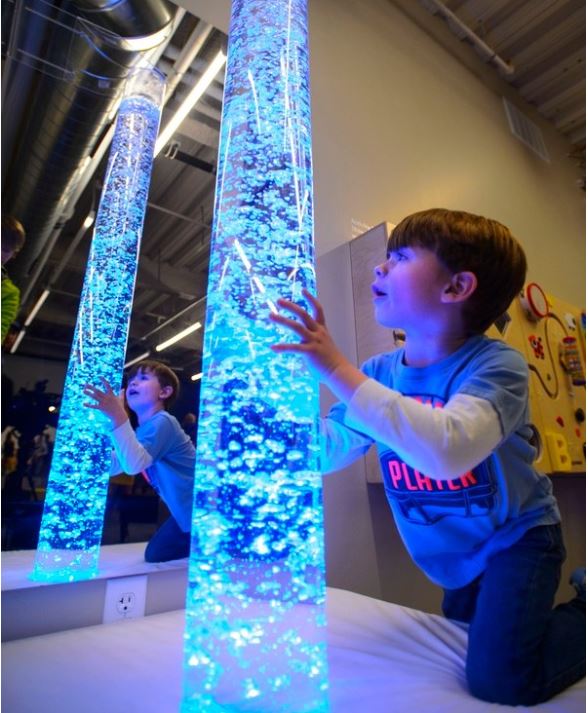 This glass tube of bubbles that changes colors is a favorite in the Jazz arena Original Image by: Steve Griffin/The Salt Lake City Tribune

The NBA as a league has done a far better job than any other major professional sports league at evolving and making attending their games friendlier to those with sensory sensitivity. Now the NBA have separated themselves even further from the pack, this time on the retail front. Stores have held “sensory-friendly shopping days” before, but the NBA has decided to do something brand new. The NBA’s flagship location, in New York on 5th Avenue, is the first retail store in the world that offers permanent sensory inclusion assistance and rooms for those who are overstimulated. Working again with KultureCity, NBA Store employees are trained to see possible signs of somebody who requires sensory assistance, like repeating of phrases or compulsive fidgeting. Special emergency exits were designed in case someone needed to leave in a hurry and numerous sensory inclusive rooms are available for the shoppers if need be. The NBA hopes their retail efforts to include those with sensory issues will spread out into dining and other retail spaces in the near future. 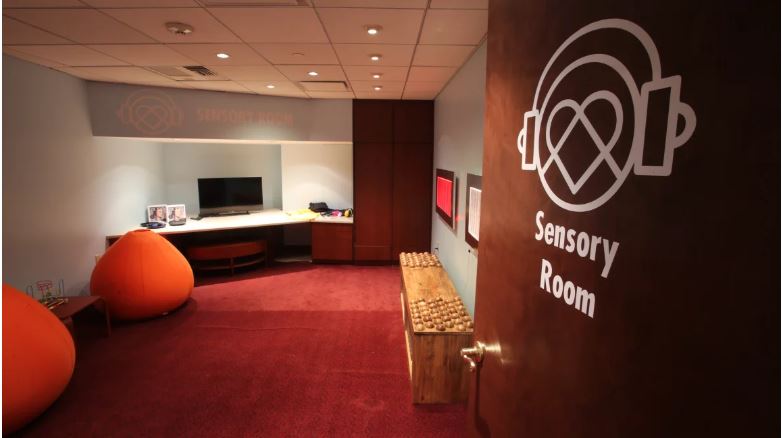 Sensory inclusive room inside the NBA Store on 5th Avenue, the first room of its kind in a retail store Original Image by: NBA

The NBA is the most inclusive professional league in North America. Over half of their arenas will be equipped to assist those with unseen conditions by the end of this year. The NBA and KultureCity have a blossoming relationship that will only develop and help more people. The league is showing awareness and knowledge by making their physical location in one of the busiest places in the world sensory friendly every day. The possible challenges of bringing your child to a live basketball game have been prepared for by the NBA, allowing for a fun and easy family experience full of smiles and happy memories. The NBA is spreading awareness and making a difference, both on the court and off the court.